Elbphilharmonie and HafenCity were just the beginning. The city has big plans: a skyscraper at the river Elbe, a park above the Reeperbahn and a brand new “Oxford” at Volkspark.

To defend its title as an “energetic city in terms of urban development”, Hamburg is giving it its all: not only has the Hanseatic city built a completely new district with HafenCity since 2001, it has also created a unique landmark with the Elbphilharmonie. In addition to ongoing projects such as HafenCity – Europe’s largest inner-city development project is expected to be completed by 2030 – or the Neue Mitte Altona, new quarters are also being built on Kleiner Grasbrook in the harbour area, on the former Beiersdorf site in Eimsbüttel or in Oberbillwerder near Bergedorf. 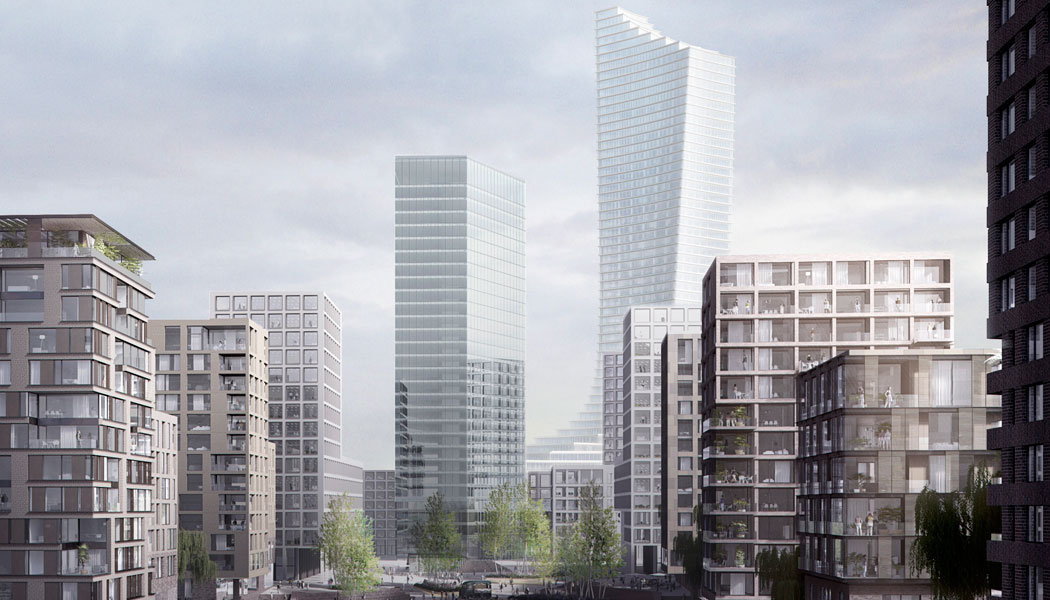 But the city has even bigger plans for its future: a skyscraper at the river Elbe, the planned Elbtower by David Chipperfield Architects, almost 245 meters high according to current designs and thus, when completed in 2025, the city’s second-highest building. According to the city, the architecture of the Elbtower is to blend seamlessly into the skyline, as a major final project in HafenCity. This is ensured, among other things, by the stepped base of the Tower, which faces the city centre. In addition to retail, gastronomy and a hotel, the Tower will accommodate co-working spaces, fitness and wellness areas, a “Kinderland” and office space.

Future made in Hamburg

Oberbillwerder in the Bergedorf district is not only Hamburg’s second largest urban development project; it will also become the 105th district of the Hanseatic city. As a model city district “Active City”, sport, exercise and health will play a central role here. In 2019, the Hamburg Senate approved the Oberbillwerder master plan on the basis of the winning design of the Danish-Dutch planning team ADEPT with Karres + Brands. On 124 hectares, around 7000 residential units are to be built, plus up to 5,000 jobs, an education and community centre, 2 primary schools, up to 14 day-care centres and as many social facilities. 11 mobility hubs, around 28 hectares of public green and open spaces with numerous playgrounds, as well as a large activity park and a swimming pool are also part of the planning.

Science City: An entire science district is to be built on 125 hectares in western Bahrenfeld.
Hamburg’s Bahrenfeld is already a player on the global science stage thanks to housing a number of leading science institutes, including the research and technology centre DESY and parts of the University of Hamburg, making the district an ideal choice to hold high the torch of science and innovation in Hamburg as Science City Bahrenfeld. With the anticipated DESY expansions and the resettlement of many of the University of Hamburg’s science departments, there is even more incentive to develop the surrounding Bahrenfeld neighbourhood into an area dedicated to nurturing scientific research and innovation. The first architectural competitions will start in 2020, and by 2040 “Germany’s Oxford” should be ready. Squares and green spaces in the quarter are to offer flowing transitions to the adjacent Volkspark. A group of architects, urban planners and landscape architects drew up the first drafts. Institutes and start-ups are also to find space in Science City, as well as around 2,500 apartments, day-care centres and schools.

Then there is the educational campus “Life Hamburg” in Bramfeld, planned by Benjamin and Janina Lin Otto. “Life Hamburg” is the working title for their lighthouse project, in which not only a day- care centre, school and university meet in a futuristic building, but also start-up companies, further education and health services – all on an area of 20,000 square meters, designed for 2,000 people. First drafts by LAVA architects show “Life Hamburg” in the shape of a horizontal eight. Together with the urban agricultural collective Cityplot LIFE Hamburg, LAVA designed a new building with three levels, which is completely energy self-sufficient and combines interior and exterior into a continuous landscape. A lot of wood will be used and a very large roof garden will be created. Within the next three to four years, the new building will be constructed close to the Otto headquarters.

Learn more about the individual projects on our architectural tours. Discover “Future made in Hamburg”.