Delugan Meissl has won the competition for the so-called Campus Tower in the eastern part of Hamburg`s HafenCity.

The building is divided into three parts, which are determined by the means of contextual parameters:
an architrave block, a waler and a head. This partition creates on the one hand a strong identity of
the whole ensemble as an urbanistic prelude for the development of the Baakenhafen, on the other hand generates urban qualities inside the building.

Special functions, such as the Start Up and HCU offices on the first floor, the access to the roof terrace with a connected office and meeting area on the seventh floor as well as a bar with a 360° view between the head of the building and the shed roof are located within the breaks subdividing the building. At the same time, the settling out of the head of the tower creates a sort of beacon effect radiating far beyond the borders of the property, thus guaranteeing a landmark effect from afar.

Two materials shape the outer appearance of the building. The opaque areas are wainscoted with dark concrete slabs; the translucent zones are designed as extroverted areas, which are concluded through deflector panes. This solution accommodates the requirements of noise protection, while allowing for a sense of openness thanks to the windows. 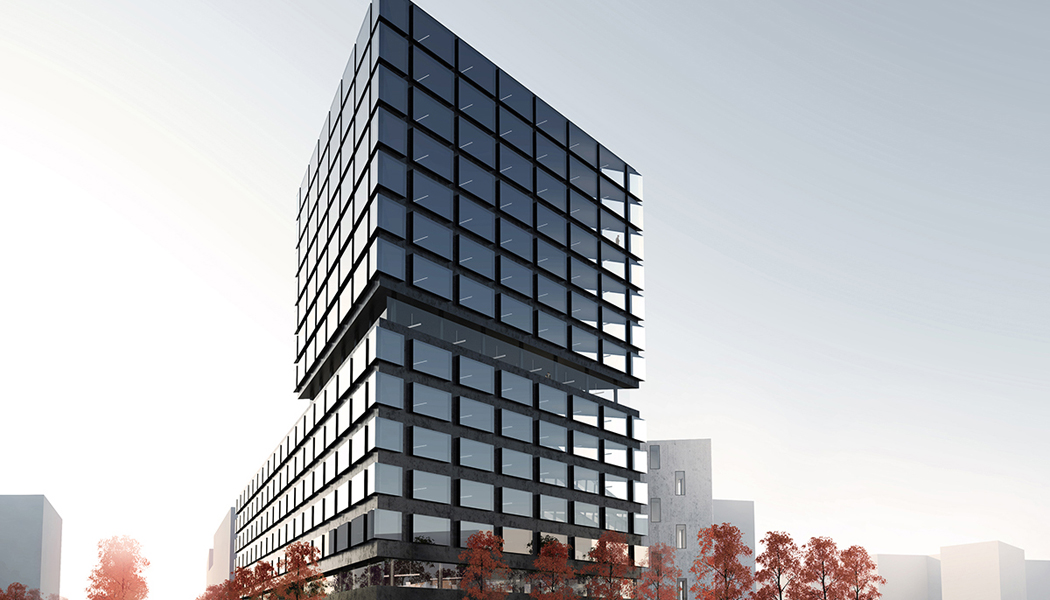 The external sunscreen is positioned between the deflector panes and the thermic shell and is therefore protected from wind and weather influences. The pattern dividing the façade follows the inner structure of the building; the opaque elements in the area of the pillars and the railing are reduced at the top. In consequence, this measure creates a self-contained elegance as well as an added value and a better view for the higher levels, while at the same time offering a cost effective solution and an energetically reasonable proportion between the transparent and the opaque materials. The structure of the façade carries on at the ground floor with large scale windows, which are connected to the opaque front.

The 360° bar located on the rooftop enables diversified visual relations to the Hafencity, the Baakenhafen, as well as to Hamburg’s city center. A filigree elevation is created thanks to the shed roof reduced towards the exterior as well as its mirrored soffit; the activities within the building are visible from the street in the evenings.

An exciting project that will enrich Hamburg’s HafenCity in future.